Our heroes are walking down a hall. We don’t know them yet but the tall one is wearing a flash tshirt with plaid pants and the shorter one has a hoodie and jacket with glasses. They walk into a Dr’s office or as we find out a High IQ sperm bank…during their conversation we find out their names are Leonard and Sheldon. They talk and realize they can’t donate, as their children might not be geniuses. Sheldon references a twin sister who has the same genetic make up he does but is the hostess of a Fudruckers…Wait a minute are they saying that you don’t have to be smart to work at Fudruckers? They try to sneak out but the nurse says good-bye and they bumble and fumble out the door. 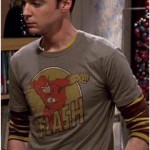 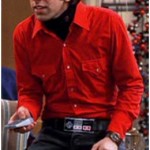 As the camera refocuses you see our heroes walking up stairs and Sheldon explaining to Leonard that stairs have to be precise, apparently he experimented with his families when he was young and his father hurt himself, but that was not the reason he was sent to boarding school- his laser experiments were, hhmmm. As the guys get to their door they hear a noise, turn around and there is a beautiful woman whom has apparently replaced the transvestite with bad skin who use to live there. We do find out our heroes are roommates but not Gay. We also come to realize that our heroes lack social skills and Sheldon would rather watch the second season of Battlestar Galactica then hang out with Penny (and really who can blame him, I mean we are talking about Battlestar Galactica). Leonard wants to know if they should have invited Penny to join their lunch and Sheldon points out they never invited the previous neighbor and he has enough friends on My Space citing over 200 when Leonard states he has never met any of them face to face, we find out that is Sheldon’s preference.

Leonard stutters over inviting Penny to lunch…talking of bowel movements and such but she comes to lunch anyway and then we find out “It all started with a Big Bang”.

Penny goes into L and S apartment and they each show her their science boards. We also find out that Sheldon is weird, although to be fair there have been a lot of signs, and has his special seat with a full blown explanation on why it is his seat…he doesn’t make Penny move out of his seat…if we hadn’t figured out that Sheldon was special by now this scene was the dead give away…as Sheldon tries to get comfortable in a different seat. When Penny moves Sheldon jumps into his seat. We find out that the boys play Klingon boggle and Penny is a Sagittarius. Penny is a waitress at the Cheesecake factory (I wonder how much they paid for that). Penny starts crying as she explains that she and her boyfriend of four years have just broken up. L and S have no idea what to do. L volunteers to let Penny use their shower as hers is not working (because hey who doesn’t ask if they can just use the guys they met 15 Minutes ago if she can use their shower, it makes total sense). Sheldon is a little freaked out by a naked woman in the apartment and Leonard reminds him that they had another naked woman in their place not to long ago, Leonard’s grandmother with Alzheimer’s.

Sheldon wants to know what Leonard is trying to accomplish because that woman is never going to have sex with Leonard. We hear knocking on the door and two more guys walk in. One is a dark haired gentleman in a red button up and a dickey with a pretty cool looking Nintendo controller belt buckle and the other is Indian, with a blue jacket and hat on. They have a DVD that L and S have to see as it is a Steven Hawking’s from before he had the computer voice. L tries to get rid of them. S says L has a lady friend over and the gentleman in the red shirt is immediately interested when he realizes it is not L’s grandmother.

And then Penny comes out in a towel because she can’t change the water from tub to shower and the man in the dickey introduces him self as Howard Wolowitz. (He thinks he is pretty cool but he is kind of creepy). L shows her how to change the water (they have a really nifty periodic table shower curtain) and she jumps in the shower with L still in the bathroom. Talking from behind the shower curtain, Penny asks L for a favor.

Next we find L and S in a car, L is driving. We find out that Penny asks L to get her tv from her ex boyfriend and S came along so he did not have to watch Howard hit on Penny.

Back to Penny and Howard…she tries talking to the other man (who still has not been introduced) only to find out he speaks English but DOES NOT speak to woman.

Back to S and L, who have arrived at Penny’s old apartment building where two girl scouts show these geniuses how to get buzzed into a building when the guy that you want to buzz you in, won’t. They get to the door and knock- this man who looks like he could bench press both of them answers the door (this guy has some GUNS, I mean wow talk about Popeye arms) and then we see S and L walking outside the building without their pants. For those who are interested S wears tighty whities and L wears boxers…we then flash to them walking back up the stairs to their apartment. S admits this was not his first pantsing and will probably not be his last and L admits that he was trying to impress Penny as to start a relationship with her but he is done with her forever.

They reenter their apartment where Howard is still trying to impress Penny. Penny is sorry that the guys lost their pants to her ex, she thought he would be nicer to them then to her. She hugs them both and re-wins Leonard’s heart-The show ends with all of them driving in L’s car, we find out the fourth guys’ name is Raj, who still can’t speak to Penny and that of the four of them, L is the Mac Daddy in Sheldon’s opinion.