The episode starts out with out heroes playing a game online (for 97 hours) and all join forces to attack the on coming goblins. Sheldon ends up with the sword and lets the others die, only to put the sword on eBay. Howard apparently uses the buy now function and becomes the sword master. The guys hear giggling and Leonard runs out with mail he has taken from Penny ‘s mailbox so he has an excuse to talk to her. Penny is in the hall kissing a HOT guy. Leonard reenters the apartment depressed. Leonard explains that he is done with Penny and is going to find someone more his speed. Sheldon brings up Leslie Winkle as she has shaved her leg and with winter coming that must be a signal that she is sexually available. Howard admits to being a sexual harassment self-taught expert. 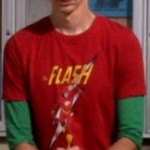 Leonard walks into a lab where a pretty girl is using her laser to heat up her cup of noodles, Leonard knows exactly how long it takes and in what can only be considered scientist lingo ask her out. She says they should just skip to the kiss, which would be the end of the date if things go well. So they do and Leslie says there is no arousal. Leonard shakes her hand and leaves only to stick his head back in and ask again and she says none.

Back to the other three guys playing Jenga at Sheldon and Leonard’s apartment. Howard and Raj ask Sheldon if he would want to know if he is a robot. Sheldon is wearing a pretty cool flash shirt. Leonard returns and says there was no chemistry. Sheldon says he knows what is going to happen and it will end up with him getting a call to come to a pet store and look at cats. Raj says he, Sheldon, could just power down. Howard says he knows a place where Leonard could have his choice of women.

Flash to an older women rumbaing and then all the guys trying to rumba across from them INCLUDING SHELDON!! Latin hips boys, Latin hips. The teacher winks at Leonard and Howard says Leonard is in for a treat, cause he has been there.

Leonard walks into the apartment singing and Sheldon turns around with a panicked look on his face. Leonard starts emptying bags and there is a cat scratch post. Leonard has been looking at cats and is thinking of names, Einstein, Newton or Sergeant Fuzzy Boots. Sheldon ask him if this is a reaction to Penny and Leonard says she rejected him (OK_ to be rejected, doesn’t one have to ask someone out?) Sheldon points out that Leonard never asked Penny out. Leonard says Sheldon is right and he should march over there and ask Penny out. Sheldon says-Oh Goody we are getting a cat. (I cracked up).

Leonard knocks on Penny’s door. Penny opens the door and Leonard ask what she is doing for dinner and Penny asks tonight? And Leonard goes off on a tangent. Leonard says 6:30 and Penny says sure. Leonard is shocked and awed. Then Penny says she likes hanging out with the guys, and Leonard realizes that she thinks it is dinner with everyone.
Shoot to 4:30 and Leonard coming out of his room with sweat stains under his arm and around his neck. Sheldon encourages Leonard by reminding him that alcohol and poor judgment could make this work. Leonard starts to have a panic attack and Sheldon tries to talk him down. Leonard tells Sheldon to call and cancel for him. Leonard goes to take another shower.

Cut to dinner and Penny asks where the other guys are and Leonard says that Howard and Raj are working and Sheldon had a colonoscopy. They compare notes on jobs, which takes about 30 second. Leonard ask about the guy in the hall and Penny says she is not ready to start dating…. then talks about 36 hours worth of sex which Leonard tries to get more details on. Leonard ends up on the floor under the table and bangs his head. Apparently there is blood and it cuts to them walking up the stairs in the apartment building with Penny asking if he is sure he doesn’t want to go to the ER. Penny asks Leonard if this was supposed to be a date, Leonard says this wasn’t supposed to be a date. That when he takes a girl out they know they have been DATED. When Leonard walks back in, Sheldon asks how it went and Leonard says well.