Our Heroes walk into their building, S is holding a bag of what looks like take out and arguing about Terminator. They hear what is a scary bad voice singing a song from Rent. Leonard wants to know what that is and Sheldon responds if Cats could sing they would hate it too. As they hear more singing, we see them running down the stairs with Penny following them. She tells them she has been picked to replace an actor in Rent for one night. Penny asks them if they want to come see her and they both respond with a loud N0! Leonard lies and says they have a symposium. Penny is disappointed but leaves for rehearsal. Sheldon is amazed at how easily Leonard Lied. His breathing never changed and he remained calm and cool. Sheldon believes this are the signs that Leonard might be physcotic Serial Killer. Leonard wants to know if Sheldon is worried and Sheldon isn’t because if Leonard was going to kill him, he would have done it a long time ago (it is hard to argue with hat logic). Cue the music… 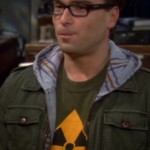 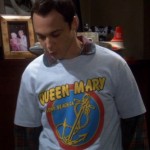 Sheldon is in his Robe knocking on Leonard’s door; Leonard wants to know what S wants at two in the morning. After some back and forth through the door Leonard gets up and they end up in the kitchen. Sheldon lets Leonard know he is uncomfortable with his lie to Penny. Leonard points out that if he hadn’t lied he would have hurt Penny’s feelings and if he had gone he would have hurt her feelings even worse. Sheldon gives him some funny advice and Leonard tells him it is a social protocol to tell someone you are friends with that they are good at something they suck at.
Again Sheldon is knocking on Leonard’s door and he tells Leonard that he thinks he has found a problem with the lie. And goes into this long process of how Penny could catch them in this lie, which is long and involved and doesn’t sound like something that Penny would even think of doing! Leonard shuts the door in S face.

We cut to Sheldon knocking on Penny’s door. It is obviously early and Sheldon tells her Leonard lied. We cut to Leonard chasing after Sheldon wanting to know why he told Penny he lied. Sheldon said he covered the lie for Leonard by saying Leonard was lying to protect Sheldon. Leonard is getting a bad feeling (what a salute to Star Wars). Sheldon has concocted a story about a cousin and drug intervention and reminds Leonard that a good lie is all about the details. Sheldon has created a Facebook page and E-Harmony page so if Penny Google’s Leo (Sheldon’s Made up cousin) She will find this. Then Sheldon says Leonard has to take Sheldon to Long Beach because Sheldon doesn’t drive. When Leonard asks if they are really going to Long Beach the answer is of course not. Leo is going to go into rehab but can relapse if Penny invites them to hear her sing again. And then it gets more complicated because Penny isn’t suppose to let Leonard know that she knows he lied to her! (What a MESS).

Knocking on the boy’s apartment and it is Penny dressed to go to her Play. And then Penny lets Leonard know how noble he is, still pretending about the symposium. Penny hugs Leonard, enter Howard and Raj…Howard goes in for the group hug and Penny says NO! Raj and Howard want to know what is going on and Sheldon explains that Penny is going to her one night performance in Rent and he and Leonard are going to the Molecular Symposium. Howard freaks out that they did not invite Raj and Howard. Howard starts to storm out and Penny stops him and wants Sheldon to tell them “the Truth”. Sheldon and Penny explain about Sheldon’s family crisis. Penny hugs Leonard again! After Penny leaves the Leonard explains that it was another lie to Howard and Raj who are disappointed because they wanted to go to Long Beach. Sheldon explains how the Queen Mary is docked there and it is now a hotel and restaurant and hosts a Murder Mystery Dinner. Raj says he is game and Howard yells shotgun. As they are running out the door, the camera pans to Leonard sitting on the couch, thinking. He says wait are we really going to Long Beach? And apparently they are!

Again we cut to Leonard in bed and Sheldon knocking on the door. Leonard hollers out that even if it doesn’t make sense the first mate did it. Sheldon comes in wearing a Queen Mary tshirt. Sheldon explains that the lie has holes! Sheldon goes out and says they can talk in the morning as Leonard hurls a mug at the door.

Leonard walks into the kitchen and sitting there is Sheldon’s cousin Leo. The actor goes into his bio when Leonard points out that Sheldon doesn’t have a cousin Leo. As “Leo” explains his bio and why he is hooked on drugs; Sheldon interrupts and they argue over why Leo would be hooked on drugs. Leonard asks Sheldon for an explanation. Sheldon introduces Leonard to Toby, a research assistant with a minor in theater. Sheldon explains that while Leo wouldn’t have gone into rehab there is a chance that he would have moved in with Leonard and Sheldon. Toby wants to change the bio, Sheldon tells him know and there is the knock at the door. Toby gets into character. Sheldon introduces Leo to Penny. Penny talks to Leo, who is over acting; Sheldon gets upset when Leo changes the back story. Leonard tries to get Penny out the door. She invites him over to her apartment for coffee and to watch a video of her performance and this will be even better because she can watch his reaction! Leonard says it is funny how things work out. Leo and Sheldon are still arguing and Sheldon points out that Toby’s parents were right to point him towards Research assistant instead of acting.

We see Penny and Leo sitting on the couch and Leo getting all cozy with Penny. The camera pans to Leonard and Sheldon-Leonard wants to know how long Leo is staying and Sheldon says he is a homeless drug addict, where is he going to go?