Our Heroes are sitting around eating, when Howard mentions the New Star Trek movie is going to have the birth of Spock. Raj would be more interested in the conception of Spock and wants to know why all aliens have the same way of having sex. You never have an alien tell Kirk, he is sticking it in her ear (he makes a good point). Penny knock and walks in because the A key is sticking on her laptop. Leonard asks what she spilled on it and she plays dumb for a minute then admits to spilling diet coke, yogurt and a little nail polish. Howard says in local nerd news some Physics bowl team is not playing this year. Leonard makes a Superman reference and Sheldon doesn’t want to participate. Leonard says they need a four-person team and quotes Spock’s dying words to him and Sheldon is in…cue music. 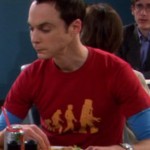 The lunchroom at work (all these guys do is eat), they are working on a team name. Sheldon wants to be named after an animal. They decide to vote and Leonard cuts to the chase and asks Sheldon if he is going to quit if he doesn’t get his way, he says yes and the guys vote to be the army ants.

We are back in the boys apartment with the guys sitting on the couch and Penny standing at a make shift podium, introducing herself and wishing she was doing something else on a Saturday. She starts asking questions and Sheldon answers. Then Howard buzzes in during the next question and Sheldon answers. Raj buzzes in and Sheldon answers again. Penny says he is being rude. Sheldon doesn’t understand why that matters since this is war. Sheldon gets up to get a wrist protector because the buzzing is aggravating his old Nintendo injury.

Leonard walks into the apartment and Sheldon is on his laptop. Sheldon wants to show Leonard the uniforms he has designed. Leonard wants it to wait because he needs to talk to Sheldon and Sheldon wants to show Leonard. He has designed the uniforms like Star Trek with Sheldon being in Command gold and the other three being in red (ha that makes them all expendable red shirts). Leonard pulls out a Batman cookie jar when Sheldon asks what is the occasion, Leonard goes on about friendship and Sheldon is now off the team. Apparently the other three had a team meeting, which Sheldon argues with because they could not have had one if he wasn’t there. Leonard says they did and Sheldon is off the team. Sheldon wants to know why he is off the team? And Leonard tells him he is taking all the fun out of it. Sheldon decides he wants to form his own team. Sheldon explains that he is going to win and as he walks to his bedroom holding his Batman cookie jar, he stops turns and tells Leonard one more thing. When Leonard asks what? Sheldon says and THIS IS A DIRECT QUOTE “It’s on Bitch!” (It was AWESOME)

We open back at the work lunchroom and Sheldon eating with a book propped up in front of him and the other three at a different table watching him. Howard wants to know whom Sheldon has on his team. Leonard doesn’t know. The guys discuss needing a strong forth on their team. Raj points out that TV’s Blossom, has a degree in Neuroscience and Leonard says they are never going to get her (which made me laugh knowing who is coming in future seasons and she really does have a Doctorate). Howard looks over at a table and says he believes he has found the answer and Leonard says they cannot use Leslie Winkle. Raj wants to know if it is because they slept together and then she discarded him? Leonard says yes. Howard and Raj want him to take one for the team. The guys walk over to her table and ask her if she wants to join their team. Leslie turns them down. Howard says they will just have to face Sheldon with out her. Leslie has a change of heart because apparently she hates Sheldon and she wants to see him destroyed. Of course he did tell her she should abandon her work for laundry and child bearing so she seems to have reason to hate him.

We get to the bowl. Penny is rooting them on. Sheldon walks in wearing his uniform. His three others walk in- the janitor, lunch lady and since Sheldon’s Spanish is not that good either her butcher or her son. Sheldon asks whom they got to be there fourth and Leslie walks up behind him and says Hello. Sheldon makes a face and turns to look at Leslie. Leslie is going to make Sheldon cry like a little girl. There are asked to take their seats and Glaushauser welcomes all to the bowl. Leonard gets the first question and Sheldon the second, Raj the third, and we flick to Penny asleep and the questions going back and forth. We are to the final question. The guys are at 1175 and Sheldon is at 1150. For 50 points they have to answer a question, no one knows on Leonard’s team, Leonard panics and can’t answer they go to Sheldon who can’t answer it either. The janitor hits his buzzer and gives and answer. Sheldon says hold on that is not their answer and wants to know what the janitor is doing (I feel a Matt Damon moment coming). Here he is janitor in former Soviet Union he was physicist. Sheldon won’t give the right answer and it turns out the janitors answer is correct but since Sheldon wouldn’t give it, his team loses and Leonard’s WINS!!They are all celebrating in slow motion when they all turn to stare at Howard who has ripped his shirt off!

We are back in the boys apartment and Sheldon is about to sit next to Leonard on the couch, Leonard says Sheldon can not sit there, when Sheldon asks why not. Leonard says is Physics Bowl trophy is sitting there. Leonard keeps rubbing the trophy in Sheldon’s face. Penny comes in and says she is settling who is the smartest once and for all. She pulls out trivia cards and starts asking questions. The first being Marcia, Jan and Cindy are the three sisters in what TV show. Neither Leonard or Sheldon can answer….Penny does and the next one….and the one after that, they are all Pop Culture questions. The faces Sheldon makes are PRICELESS!