Our heroes are at the Cheesecake factory playing Tetris and arm wrestling. Penny tells them the other waitress wants them to stop. Penny delivers a free birthday cheesecake to another table and then asks Leonard if he is coming in next Saturday for his free cheesecake. Sheldon says he cannot because he is Lactose intolerant. Leonard says he has never celebrated his birthday his family doesn’t believe in it. Leonard has never had a birthday party. Howard says he loves Birthdays; his mom makes his favorite breakfast and his friend’s sleep over and play laser tag. Penny thinks those are great childhood a memory, Howard says that was last year. Cue Music…. 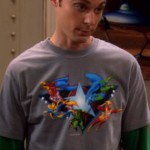 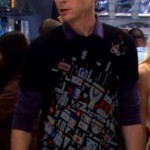 Leonard can be seen leaving the apartment and being told no Peanuts in the Thai food for Howard. Penny knocks on the guy’s door and Sheldon answers telling Penny Leonard has just left. Penny wants to throw Leonard a kick ass party. Sheldon doesn’t want to throw him one. Howard hears the word Party and is in. Sheldon really doesn’t want to help. Penny tells Sheldon if he doesn’t help she will go into his room and un-bag all of his mint condition comics and draw a smiley face on one. Sheldon says she can’t do that because then they wouldn’t be mint. Penny wants to know if Sheldon understands blackmail, we see things click in Sheldon’s head and he states that they are going to throw Leonard a kick ass party.

Raj and Howard are sneaking up the hall and to Penny’s with wrapped gifts. They do a weird knock on the door; Sheldon opens the door and tells them they got the knock wrong. Penny tells Sheldon to let them in and asks what the guys got Leonard. Raj got him an Alex Ross inspired Batman statue and Howard got him an autographed physics book. Howard asks what Penny got him and she says a sweater. Penny asks Sheldon what he got Leonard and he tells her he doesn’t do gifts. Penny tries to explain why he should (pretty much wasting her breath), Howard tells her to tell Sheldon it is a non-optional social convention, which she does, and all the sudden Sheldon is in. Howard tells her he came with a manual.
Penny will drive Sheldon to get a present, Howard will get Leonard out for a couple of hours and Raj is suppose to move all the stuff from Penny’s to the guys apartment.

Howard goes to the guys and Leonard is in the Halo battle of his life. It becomes obvious that Howard is going to have a hard time getting Leonard out of the house. We go to Sheldon and Penny at what looks like a Best Buy (who obviously didn’t sponsor because unlike Cheesecake Factory, they don’t name it). Penny explains that you should buy something for a friend that he wouldn’t buy himself.
Back to the apartment where Howard pretends to eat a granola bar and tells Leonard he has to go the emergency room. Leonard runs to get his keys and Howard calls Sheldon and tells him the laundry is out of the basket.

Back to the store where Sheldon is deciding between two boxes and Penny tries to hurry him by telling him the guy on this box looks happier. As they are leaving, a lady asks Sheldon if he knows about this stuff and he helps her, which leads another person to ask for help and then another.

Back to Leonard and Howard now at the ER. Howard tries to get the ER nurse to play along but she says no. He calls Penny and she says if he stalls Leonard a little longer she will point out which of her friends are easy. Howard almost goes into shock and tells Penny he will.

Howard pulls out the granola bar (DON’T DO IT HOWIE) and actually takes a bight. Leonard goes up to the nurse and Howard walks up swollen up and they rush him in. We then see Howard and Leonard walking up the stairs at the apartment building. They tested Howard for everything and he is walking funny because apparently they did a Colonoscopy. We get to the boys apartment where Leonard figures out that Howard has been trying to distract him. They walk in and Raj is singing with no shirt on and obviously drunk. The apartment is wrecked and everyone left an hour ago. Raj at least videotaped it and we see Leonard and Penny sitting on the couch watching the video. Penny tells Leonard she is sorry and gives him a BIG kiss. After a few seconds of shock, Leonard asks when Penny’s Birthday is.