We open with Sheldon upset with walletnook.com because the wallet he ordered should have 8 spots but the removable id takes up one of them. When Leonard suggests that he could get rid of his Justice League of America membership card. Sheldon responds with it has been in his wallet since he was 5. The card says to carry on your person, right under Batman’s signature. There is a knock on the door and Leonard answers it. It is Howard and Raj, Raj is carrying his laptop and we find out his parents now have broadband. He introduces them and Dr. Koothrappali asks Raj to point the camera up as they are looking at Leonard’s crotch. Raj walks around and shows them the apartment and introduces Sheldon. Raj starts to tell them bye when they bring up a girl and ask if he remembers her. She apparently use to pick on him (Isn’t that a sign of true love). They have set them up and start taking about June weddings (sometimes I wonder if prearranged marriage would make life easier, and then I stop drinking). Raj wants them to back off and Sheldon explains culture ideas from India. Raj wants to know why Sheldon is explaining his own culture to him. Raj hangs up with his parents who are going to watch Doogie Howser. Raj is freaked out about his arranged marriage and Sheldon thinks he should go through with it. The other three get side tracked into a conversation about Fiddler on the Roof and Raj says he knows what he is going to do. When asked what he replies find new friends and leaves. The other three decide to watch Fiddler. Cue Music… 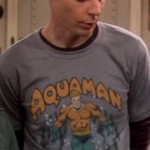 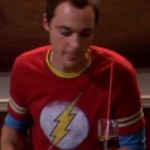 Sheldon is on the phone canceling his membership to the Planetarium. Raj shows up and tells the guys he is screwed. He then plays a sweet vm for them and says he has to call her back but he can’t because he can’t speak to girls and if he doesn’t call her back he will never hear end of it from his parents. Howard asks for Raj’s phone (DON”T give it to him Raj, Don’t do it), alas Raj gives Howard his phone and Howard calls. He pretends to be Raj on the phone and sets up a date. Leonard is laughing, and Sheldon is confused. After hanging up Howard says Raj can now thank him. Raj says for what making him sound like a Simpson character? Penny knocks and walks in and says she needs Guinea pigs. Sheldon tells her where a place to pick them up is. Penny promises that one day she will get the hang of talking to Sheldon. Leonard says Sheldon’s mom has been working on it. Penny explains that she is going to be a bartender and needs to practice. We can tell Leonard wants to but explains Raj is going through some stuff and as he is telling her no, Raj runs over and whispers in his ear. Raj would like to take up drinking.

Cut to Penny’s apartment where there is a bunch of liquor and the guys are standing around. Penny hands Leonard a Tequila Sunrise and ask what Raj would like. Raj whispers in Leonard’s ear whatever Penny recommends. Penny recommends a Grasshopper. Raj nods his head yes and Penny makes him one. Sheldon orders a Diet Coke, Penny needs him to order a drink so she can practice. He orders a virgin something or other, which turns out to be a rum and coke without the rum. Penny hands Raj his Grasshopper. Howard orders a Slippery Nipple to which Penny replies he is cut off. Raj then asks Penny where his life has gone and everyone turns in shock because Raj has just talked to a woman. Raj goes on about his plans and dreams. Leonard says this is amazing. Raj keeps going off about how he doesn’t want to get married and Penny tells him to just start with a date. Raj says he can’t talk to woman and Penny points out he is talking to her. Raj calls his grasshopper a sweet green miracle.(Ah the wonders of alcohol). Penny talks Raj into having his date at her restaurant so that she can keep an eye on him. Leonard wants to know what the plan is –for Raj to stay drunk for the rest of his life; Howard says why not it worked for his parents.

Raj and a Beautiful Indian woman are sitting at the Cheesecake Factory. She is obviously not having a good time and Raj is drunk because no man in his right mind would say to a woman, you have lost a lot of weight, which must have been hard for you because you were so fat (I think I would have taken a swing at him). Raj proceeds to stick his foot in his mouth and jams it down his throat. The rest of the guys are sitting at the bar watching the date. Sheldon thinks that Raj date looks like a princess from a book his mom use to read to him. The story was about a monkey who was different and never quite fit in. Sheldon says he really liked the monkey and wasn’t sure why. Penny says she knows. Raj and his date walk over and Raj introduces them and tells them all it is great she is no longer fat. Sheldon stands up and quotes the book he was just talking about. Sheldon starts talking to her and it seems like he is flirting and Raj starts getting a little jealous and tells Sheldon to back off. It starts the three of them arguing. Sheldon LEAVES with Raj’s date, that bears repeating. Yes folks, Sheldon Leaves with Raj’s date. Raj asks what the hell just happened to which Leonard responds he has no idea and Howard responds he just learned how to pick up Indian woman.

We are in Leonard and Sheldon’s apartment with Raj on Skype with his parents. Sheldon walks in and Raj blames him for messing up his date and wants Sheldon to explain to his parents why they will not have grand children. Sheldon doesn’t know but wants to know if Raj has a low sperm count. Raj’s mom wants to make sure he is wearing the boxers she sent. Raj wants to stop talking about his testicles. Sheldon doesn’t understand what he has done wrong and Leonard explains you do not leave with another friends date. Sheldon replies all right noted. He then says sorry. Sheldon says she wouldn’t have left with him if Raj had not been drunk and boring. Sheldon says goodnight, Leonard wants to know how the date went. Sheldon says they talked and then he came home. Leonard wants to know if they are going to see each other again and Sheldon says no, he already has a dentist. Leonard wonders who is going to tell Sheldon they are not going to have grand children.